Conservatives are " listening to local residents’ concerns on Heathrow expansion..."

Justine Greening MP for Putney, Roehampton and Southfields has today welcomed Conservative Party leader, David Cameron’s statement ruling out the economic and environmental case for the expansion of Heathrow.  She has said it shows that the Conservative Party is listening to local residents’ concerns on Heathrow expansion and will be fighting against the government’s plans.

In a Parliamentary motion and in an article for the Evening Standard the Conservatives have said that the case for the expansion of Heathrow Airport has not been made and they have called on the Government to abandon its plans which would see an end to the vital runway alternation giving our community respite from planes overhead half the day, and third runway being built at Heathrow. 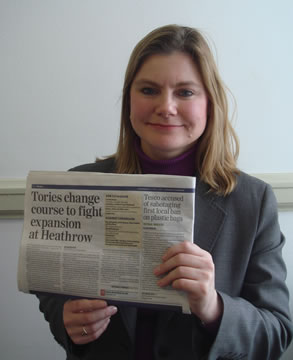 Justine pictured here with the article in The Standard said:

“I know how concerned we have been as a local community, not just here in Putney, Roehampton and Southfields, but across London.  We have campaigned hard to get our message across that all day flights and expansion would be a disaster for our local quality of life.  I’ve also been making the case within the Conservative Party and having gone through this consultation process, we have arrived at the same conclusion that everyone, apart from the government have reached – that expansion simply isn’t possible   We set four key tests on the environment and as Mr Cameron has said not only have these very clearly not been met, the economic case for expansion has not been adequately made either.

This is great news for local residents, but we will continue the fight to get the current government to change its mind and stop these plans before they get any further.  I will be continuing to fight Government plans with the backing of David Cameron and my Party and I hope that the Government will now recognise that the people of Putney, Roehampton and Southfields do not want this expansion.”