Dozens of spectators, including children, had to be rescued by Chiswick RNLI from rising water as they watched the Boat Races from the foreshore of the Thames on Saturday (April 11).

Three lifeboats from the local RNLI station,which were on duty for the University Boat Races were deployed to evacuate around sixty people who became cut off with limited or no options to reach higher ground on the foreshore at Hammersmith Mall, Chiswick Mall and in Barnes.Seven people were evacuated from Chiswick Eyot. A small child who was at the water's edge crying was spotted by one lifeboat crew and reunited with his parents.

The lifeboats from Chiswick RNLI were on the water specifically to deal with such an eventuality, but the numbers in jeopardy were a surprise.

An RNLI spokesman said that many of the hundreds of spectators who chose to view the women's and men's University boat races appeared unaware that they would be exposed to the substantial wash from the flotilla following the races, and from the rising tide.As a result many were cut off and found themselves with no or limited

RNLI Helmsman Luke Dillon was checking the wash line of the flotilla following the women’s race. 100 metres up stream of the White Hart pub in Barnes a small boy wearing a red jumper was seen standing on a slippery rocky part of the embankment; the crew saw that the child was scared and crying and was unable to help himself to safety. The large wash from the flotilla had caused him to lose his balance and soaked his trousers. Luke Dillon brought the lifeboat close to the embankment and placed a crew member ashore who carried the child a short distance and up a flight of steps into the care of his mother. 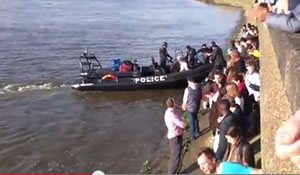 Following the women’s race seven people were evacuated from Chiswick Eyot where they were cut off by the rising tide. After the men’s race it soon became apparent that a great number of people were in trouble. Three lifeboats evacuated spectators on the foreshore at Hammersmith Mall, Chiswick Mall and in Barnes.

In the third Lifeboat RNLI Helmsman Peter Knight, dealt with a large group who were trying to reach safety via a small ladder; it was clear that they would not all be able to evacuate before the tide rose substantially, already many already paddling and trying to stay upright on a very slippery surface. Marine commandos were already assisting in a small rib, the RNLI crew evacuated 40 people in two batches.

Chiswick RNLI Station Manager Wayne Bellamy commented “This incident showed once more that the tidal Thames can catch people unawares. Whilst RNLI Lifeboats have rescued a number of spectators of earlier Boat Races, the numbers in trouble on Saturday were significantly greater than previous years. Thankfully the diligence of our three RNLI Lifeboat crews and the contribution of the Royal Marines and Police boats ensured that nobody came to serious harm.”

Chiswick RNLI Lifeboat is the second busiest in the UK and Ireland; since starting service in 2002, has attended over 2700 incidents and rescued over 1400 people.The four Thames lifeboats together have responded to over 5,000 calls. To learn more about the lifeboat station go to www.chiswicklifeboat.org.uk.