After powering through 107,062 strokes, burning 65574 calories, and suffering eight days of pain, David Walliams has finally completed The BT Sport Relief Challenge: Walliams vs The Thames. 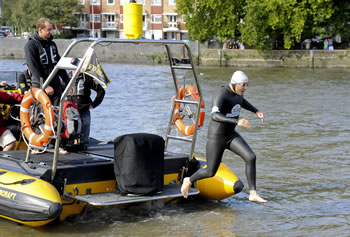 Putney Embankment started filling up from 3.50pm as residents came out to lend their support and voice - and wait they did as the tides were slow to turn and he was spotted at 4.54pm heading away from Hammersmith Bridge.  He sped through Putney Bridge at over 5mph with cheers whistles and horns from the supporting crowd - apparently according to David on The One Show tonight "it was just swimming - all I did was put one arm in front of the other..." - what an understatement!

Despite having to battle a nasty bacterial bug, itchy water flea bites and bitingly cold water that threatened a serious case of hypothermia, David completed 140.54 miles – seven times the length of the channel – as he triumphantly crossed the Westminster finish line at 6.24pm to huge, roaring crowds of supporters cheering him on from the banks of the river. So far, he’s raised a staggering £1,093,325, and the money is still coming in.

The epic challenge started last Monday (5th September) when David set off from as close to the source of the  Thames as possible in Lechlade, Gloucester. David’s wife, Lara Stone, sounded the klaxon as he waded his way into the 15 degree water - colder than the English Channel.

Despite the excitement, just a short while into the swim David’s trainer, Greg Whyte, spotted a blue tinge on David’s back – the first signs on hypothermia. Although David preferred to swim in trunks, Greg insisted David changed into his wetsuit at the first stop as a matter of urgency. Fortunately he fought off hypothermia but the torrential weather conditions meant David fell drastically behind schedule.

Fuelling up on bowls of porridge and protein bars eaten in the water, David tried his hardest to bounce back from a difficult day one, but three days into the challenge the filthy river became too much for the swimming hero. Despite doing his best to avoid sickness, David contracted a nasty stomach bug and suffered severe vomiting and diarrhoea.

With his body cramping and his appetite failing, David was only managing to stomach small amounts of food and as a result, his trainer Greg Whyte became increasingly concerned about David’s physical state.

Things were looking better the next day though as David was visited by good friend Jimmy Carr who came out to meet him at Shiplake Lock on Friday morning to give him some on-river vocal support.

Over the weekend David, having completed nearly 100 miles of arduous swimming, even stopped swimming for a short while to turn around and help and help a struggling dog, who had jumped into the water, to safety.

For more information or to go the extra mile for Sport Relief 2012, just like David, you can enter the Sainsbury’s Sport Relief Mile today at www.sportrelief.com.

A pep talk from Miranda Hart