THE Fulham Boys School (FBS) is delighted to announce the appointment of its head teacher designate.

The new free Church of England school for 11 to 18 years olds plans to open next September with its first intake of 120 Year 7 boys and Mr Alun Ebenezer as its first head.

Mr Ebenezer is currently the deputy head teacher of St Teilo’s Church in Wales School, a large secondary school in Cardiff. Previously, Mr Ebenezer was assistant head at Treorchy – the first school in Wales to achieve excellence in all 15 areas of its school inspection.

Mr Ebenezer will be joining The Fulham Boys School next year and in the meantime will be working alongside the Governing body in developing the curriculum and recruiting staff.

Mr Ebenezer said:
“I’m delighted to be taking up this position, and honoured and excited to have been invited to help start a school with such a clear ethos and vision for boys’ education. Education is transformational, even more so when in a Christian perspective. I am driven by the belief that school is about preparing a young person for life.

“I look forward to working closely with the Governors, in attracting and retaining the best teachers. Along with strong leadership, high quality teaching and learning is what makes pupils and schools successful.”

The Fulham Boys School is partnering with the London Diocesan Board for Schools in translating its vision into reality, drawing on the Diocese’s considerable expertise in establishing successful schools including the Chelsea Academy.

Andy Yarrow, head of Chelsea Academy, a Church of England school set up from scratch in 2009, and already ranked as ‘outstanding’, will be mentoring Mr Ebenezer.

The new Fulham Boys School is due to open its doors to 120 Year 7 boys and will eventually have capacity for 800 pupils. A site has been identified in Fulham and advanced negotiations are in progress.

A “Meet the Head” day will be announced soon so that prospective parents can meet Mr Ebenezer in the new year and find out more about the school. 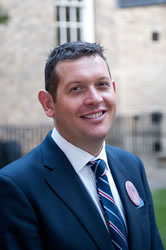 Alex Wade, chair of The Fulham Boys School governors said:
“Alun will rest at nothing to make this the best boys school. Our aim is to ‘Bring out the best in boys’. I cannot think of anyone more suited to doing that than Alun Ebenezer. “

As a new school, The Fulham Boys School is not part of the local authority co-ordinated admissions process this year and .parents can still apply for a place for September 2013 via the school’s website.

On 1 March 2013 parents will receive two offers - one from the local authority and one for The Fulham Boys School. Only then will parents need to decide which one to accept.