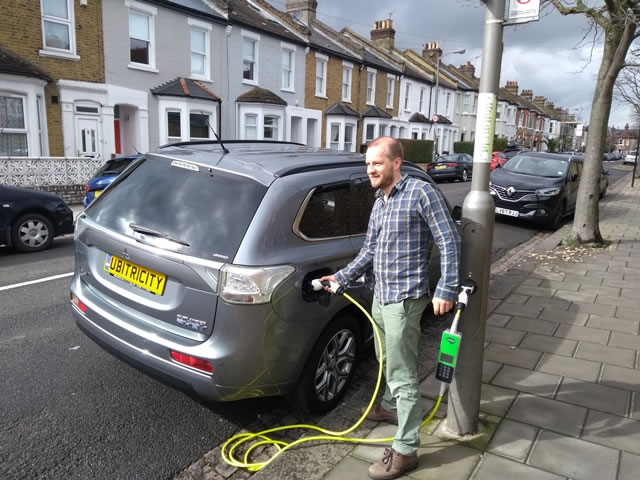 The first of a local network of electric vehicle chargers fitted to lampposts have now been switched on and are being used by residents.

There are already 15 lampposts with EV charging plugs fitted to them where residents have electric cars and who have requested them.

Register your interest in having a charging point near your home here.

Another 230 are programmed to be installed across the borough later this year for residents who already own, or are in the process of purchasing, an electric vehicle.

As well as the 230 “on demand” lampposts the council is also:

• Installing a further 380 charging plugs in lampposts within two pilot zones – in Putney (149) and Battersea (231) – to gauge local demand and encourage more people to go electric. The results from these trial schemes could see this key infrastructure extended to other areas.

• Providing another 120 Source London car charging points at various locations across the borough, adding to the 99 already in use at 33 separate places in Wandsworth.

• Setting up a new e-car club in Wandsworth – offering a convenient and eco-friendly alternative to car ownership, providing electric vehicles to hire by the hour, day or week.

The council says the number of electric vehicles registered in Wandsworth has grown from 127 at the end of 2015 to 408 today, with numbers rising by around ten per cent every three months.

Current projections indicate that some 5,500 electric vehicles will be registered in the borough by 2025, but with enhanced infrastructure and more charging points that number could rise to nearer 10,000. Existing analysis indicates that Wandsworth already had one of the highest take up rates in London for electric vehicles.

One resident benefiting from the initial installation is Matthew Paterson, a computer software developer from Mandrake Road in Tooting who became the first resident in Wandsworth to have lamppost EV sockets in his street switched on.

Matthew owns a plugin-hybrid and makes relatively short journeys powered solely by its electric motor. He can now use any of three new lamp post charging points near his home.

He said, "This is a game-changer. Until now, in order to drive fully-electric I have had to travel half a mile to the nearest charging point, walk back home and then return again a few hours later to pick it up on a regular basis. It gave me plenty of exercise but was a drain on my time.

“Having local charging points virtually on our doorsteps makes owning an EV practical for everyone who lacks off-street parking; I'm sure that this new infrastructure will encourage others nearby to follow suit and 'go electric'."

Introducing lamppost charging points has no impact on parking provision in the borough. There are no restrictions on the types of vehicle allowed to use adjacent parking spaces, so they can be used by both electric and non-electric vehicles.

The lamppost charging sockets are being installed by ubitricity. Its founder Knut Hechtfischer said, “We’re delighted to be working with Wandsworth to help its residents charge conveniently right outside their homes.

“Up to 85 per cent of residents in some areas of London do not have access to off-street parking, this was previously seen as a real barrier to EV uptake. We hope lamppost charging can play its part in promoting EV ownership.”