Have Your Say On Proposed New Cycle Quietway 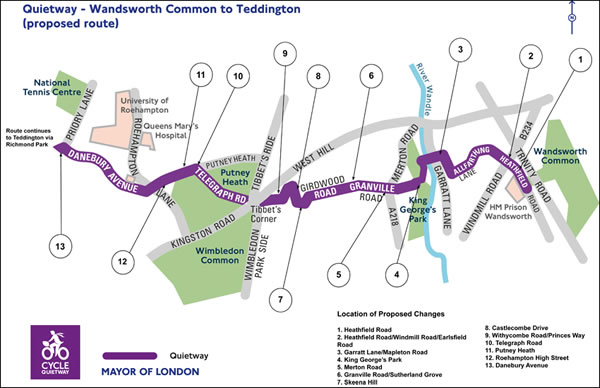 Local residents are being invited to have their say on proposals for another cycle quietway through the borough.

Quietways are being promoted across the capital by Transport for London which wants to create a network of quieter and less busy backstreet routes that inexperienced and less confident cyclists would be happier using.

In some cases only new signs and limited road markings are necessary to create quietways, but sometimes more extensive changes need to be made to roads.

The proposed new quietway would link Q4 in Wandsworth Common with Teddington via Richmond Park.

Following consultation last year work is cuurently progressing on two other quietways - Q4 from Clapham Common to Wimbledon and Q5 from Waterloo to Norbury.

You can find out more and discuss the proposals with a council officer at a series of drop-in sessions at the following locations:

You can also take part in the council’s consultation online. Follow the links to the online form at www.wandsworth.gov.uk/quietways.

The deadline for responses is November 13.