Southern Italian cuisine on the shores of the Thames

With a view over the Wharf to Putney Bridge and seating outside, this restaurant should prove popular as the weather improves, but on a freezing cold February day we did not stop to take in the view until we were inside.

Greeted like we were old friends, we were led through the large, modern restaurant past an open kitchen, hung parma hams and a tempting display of Italian cheeses to our table. 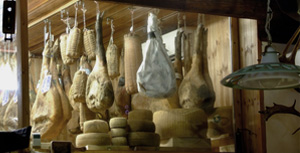 Promising a revolutionary and authentic Southern Italian experience, diners can choose to eat either in the main restaurant or at the deli counter perching on stools for a light nibble - a great idea if you want to catch a bite before the cinema.

The menu offers traditional Neapolitan dishes such as Paccheri alla Genovese and sharing plates, including pizzette and antipasti with fresh buffalo mozzarella flown in daily from Italy.

We caught up on gossip and the extensive menu with a glass of house wine (£5.50). The wines are exclusively Italian, with over 100 labels available prices ranging from £15 to £175 a bottle. There are homemade breads, including various flatbreads and freshly sliced bread at the table but sadly no olive oil to dip these in.

For starters my friend chose the Formaggi misti (selection of meats and cheeses) £8 and I opted for the Verdure biologica all’olio extravergine d’oliva (organic vegetables marinated in extra virgin olive oil) also £8. E's plate was filled with two cheeses plus a generous portion of the buffalo mozzarella and parma ham which chef Nicola Buono ships in from Italy direct. My vegetables were very green - not only ethically but also colour as there was a large portion of asparagus and four very tasty artichoke hearts covered in a rich green organic and very tasty olive oil - the breads came in very handy.

The pasta selection is quite small and both being serious carnivores we opted for meat! I chose for the Entrecote “Caparossa” marinato da noi (£15), 300g of ribeye steak which has marinated in their special blend of sage, rosemary, marjoram, oregano. Beautifully cooked on the rare side of medium rare the meat was melt in the mouth gorgeous, but the marinade is quite strong and may not be to everyone’s taste. E chose the Pollo alla brace con spezie (£12), half a Grilled free-range organic chicken with Mediterranean herbs and spices.  Succulent and tasty, it was a perfect lunch dish if it had been half the size.  Not one to give up on a challenge, she managed to finish.

We shared a generous green salad as an accompaniment however the plentiful portions meant that we could not contemplate dessert.  So we gathered the bill (£68.50 excluding service) over our cappuccinos which arrived with some delicious looking shortcakes and chocolate nibbles.  Alas, even these were one bite too much therefore we wrapped them up and gave them to our appreciative children as treat when we got home.