Valentina Putney - Not Just A Restaurant

But a vintner, a deli, a spuntino bar, a caffe & a restaurant!

Valentina's opened on the Upper Richmond Road two years ago this month having expanded from the original deli & restaurant in East Sheen since 1991. (A third has now been opened in Sevenoaks).

Knowing the quality at the Sheen establishment I was looking forward to my lunch at Putney. Tucked behind East Putney Station in the Swish building it is much larger than the original in SW14 - it is more 'swish' & sophisticated (it has a motorbike & side carrier stacked with deli stock! suspended between the ground & upper floor!) & much larger!

Too windy today to sit outside (also British Gas is currently digging up the westbound carriage way outside so sadly it would not be too peaceful), we went upstairs to the modern chic restaurant.

An extensive menu was available we decided to enjoy the summer weather and ordered an order of Anti Della Casa - a generous platter of various salamis, hams & cheeses plus a dish or marinated mushrooms and olives (£8.25) and a Vegetarian Antipasto of char grilled vegetable including artichoke, courgette, peppers, aubergine and more (£8.75). Both were delicious and the two platters were bare when the friendly waitress returned.

To accompany our meal we opted for a refreshing £4.50 per glass - there appeared three wines of each colour sold by the glass which can be found on the back of the menu - the main wine list is wide ranging but all by the bottle - too much for a pre school run catch up lunch. We opted for the bottled tap water with accompanying ice in addition to rather than bottled mineral water. 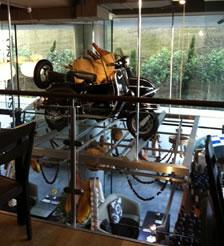 Our generous portions of salads arrived - I had hesitated between the chicken salad or the parma ham & pear salad - the waitress recommended the latter and I did not regret it - a refreshing tangy salad combining crisp sweet pears and the salty parma ham (generous portion of both) on a bed of rocket drizzled with balsamic vinegar (£11.50). My friend opted for the Insalata Valentina (£11.50) a salad of mixed leaves, char grilled aubergines, sun dried tomatoes and mozzarella balls, which received the thumbs up.

Too full for pudding (but very tempting they looked) we simply asked for coffee and the bill (£53.05 excluding service). As I wandered back through the deli - I succumbed and bought a fabulous walnut loaf (£2.75) for my husband to enjoy with this cheeses when he comes tonight - who says I don't think of others!

Valentina's in Putney lives up to the well earned reputation of the  original in Sheen - an authentic family business offering a little piece of Italy on our doorstep. I am not sure what a Spuntino Bar is - but I am sure one of our readers will inform me! So if your looking for a great coffee or a meal be it lunch or dinner then I recommend you make your way along the Upper Richmond Rd (despite the roadworks) and give it a go.