Exploring The Thames Through The Centuries

After almost 200 years a rare artwork showing both banks of the Thames through London will be presented on a special website, with contemporary photographic panoramas - recording how the capital’s riverside has changed through the centuries.

The website, www.panoramaofthethames.com will go live on September 22 as part of Totally Thames Month.

The Panorama of the Thames website will enable everyone with an interest in London’s great river to explore its banks, learn about the Thames over the centuries, and compare today’s landscapes, architecture, trades and activities with those of the past.

Picture shows Isleworth depicted in 1829 and 2014. Copyright of the Panorama of the Thames

Digital restoration of the 60ft long 1829 panorama, depicting 15 miles of river from Richmond to Westminster, brings the historical Thames to light in great detail and clarity, in a way that could never have been imagined by the Georgians.

And panoramas of today’s Thames, from the Greater London boundary above Hampton Court to Tower Bridge at the City, use newly developed techniques to show the river banks moving past, like walking the Thames path. Just as with an informed guided tour, you can stop and find out about what you see. These contemporary, linear, panoramas are a celebration of the river, showing the Thames at its best

Says John Inglis, project director: “Just as with the 1829 panorama and the earlier works, these contemporary panoramas will become increasingly valuable in years to come as a record of a rapidly changing riverscape. They have been made at high resolution for the future, but for now they are accessible to everyone everywhere on our special website. We have created new technology to make these panoramas accessible to all through the web. Our belief is that the exercise should be repeated more frequently than every coupleof centuries.” 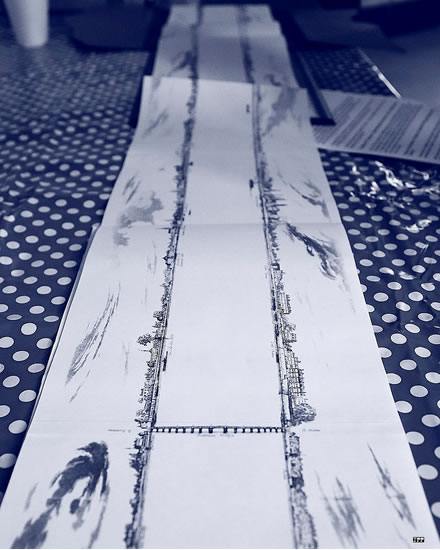 This release is only part one of an ambitious project which will include 40 contemporary riverside panoramas covering the 32 miles of riverbank, plus details of all the 33 bridges crossing London’s Thames and all the inhabited islands. How quickly this can be completed depends on funding, and finding corporate sponsors to back this endeavour.

A not-for-profit company has been set up specifically to produce the Panorama, and while this marathon undertaking by John and his project partners has received glowing endorsement from the likes of Boris Johnson, Lord Rogers, Vince Cable and Simon Thurley, financial sponsorship has been less forthcoming.

The Panorama of the Thames project was conceived some years ago by John Inglis and Jill Sanders who live and work from an island midstream of the river near Hampton Court.

In 2009 John, an award winning visual effects director on various movies, www.imdb.com/name/nm1199444/ survived a ruptured abdominal aortic aneurysm, an emergency that is almost always fatal - only one in 100 sufferers of this rare condition survive. Recovering from surgery, this event made him think he should apply his skills to something worthwhile for the future, and thus began the Panorama of the Thames project.Aalmost 200 years ago by publisher Samuel Leigh when, in 1829, he produced a 60ft water-coloured engraving of the river banks from Richmond to Westminster.

An 1829 panorama was published by London bookseller Samuel Leigh (1780-1831). The 60ft water-coloured engraving of the river banks from Richmond to Westminster. depicts 15 miles of the Thames upstream of Westminster at the end of the reign of George IV.

Minutely illustrated, the book unfolds as an artwork measuring 60ft and shows both banks facing each other. The Wyngaerde Panorama (1543), the Visscher Panorama (1616) and the Hollar Panorama (1547) add to the historical context of the Thames over time.

The digital restoration of Leigh Panorama has been funded from independent sources, but commercial sponsors are urgently needed for completion of the contemporary panoramas and the website - and there is much still to be done.

Once completed, the Panorama of the Thames will feature both banks of the 26 miles between the GLA boundary and Tower Bridge, all 33 bridges across the London Thames, and the islands. A special audio visual presentation was very well received at a special viewing at Chiswick Pier last week.