Residents Tell Boris Where To Put His Bikes

Residents have provided the council with more than 100 different suggestions where to put new Barclays Cycle Hire docking stations once the scheme is expanded into the north of Wandsworth.

More than 200 people contacted the authority after it launched a consultation last October – coming up with 123 unique suggestions where the popular bikes could be located.

Clapham Junction station received the most nominations with 35, and the council is now looking into locations in its vicinity that would be best suited to housing a docking station.

Areas close to Battersea Park were also popular with residents, and feasibility investigations are being conducted to explore each proposed location’s potential.

Once all investigations are complete, the authority expects to submit planning applications for 80 stations in separate sites across the northern part of the borough – each housing approximately 24 bikes. 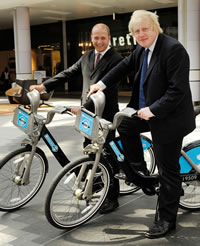 Councillor Russell King, Wandsworth Council's transport spokesman, pictured left with Boris said: “We had an amazing response from members of the public and I would like to say a huge thank you to everyone who contacted us with suggested locations.

“Our officers have visited the vast majority of sites nominated and we hope to be able to announce a full list of the 80 planned locations for the scheme in the near future.

“Having seen how popular the bikes have been in central London, I am confident adopting the scheme in Wandsworth will ease the pressure on our roads and create space on overcrowded buses, tubes and trains.  We are always looking to improve the range and quality of our transport services knowing how essential it is to the health and prosperity of the borough.”

Transport for London’s latest research found
- three quarters of Barclays Cycle Hire members started to cycle in London as a result of the scheme.

- one in five members have bought cycling equipment and 80 per cent of members think the scheme makes a positive contribution to the capital.

Mayor of London Boris Johnson last year announced plans to expand the scheme across parts of west and south west London in 2013.

The enlarged area could include the area of Wandsworth which lies east of Putney High Street and north of the South Circular.

Councillors want the scheme to spread into other parts of Wandsworth in future and will continue to work with Transport for London and the Mayor to explore ways of securing a further expansion.

The authority has been lobbying for the Barclays Cycle Hire bikes to be rolled out south of the river as part of the Wandsworth Travel Choices campaign.