Wandsworth a favourite for filmmakers

Wandsworth Council informs us that close to one tenth of all filming in London now takes place in the borough, according to the latest figures.

Wandsworth Council’s film office has been busy working with a host of different filmmakers over the past year to arrange television and film shoots – generating almost £200,000 for the local authority in the process.

In this era of economic uncertainty, the money - £197,000 - has helped the town hall ensure council tax bills remain the lowest in the country.

According to research by Film London – the capital's public agency for feature film, television, commercials and other interactive content – Wandsworth has leapt to number three in the top 10 London boroughs for filming, and now accounts for 8.7 per cent of all filming in the capital.

In recent weeks, eagle-eyed residents may have spotted filmstars Eric Bana, Rebecca Hall, Ciaran Hinds and Jim Broadbent filming an as yet untitled suspense thriller in the borough.

Elsewhere, new ITV comedy Great Night Out, starring Ricky Tomlinson and Will Ash has had scenes filmed in the borough and another comedy, Bad Education, written by and starring comedian Jack Whitehall and featuring Matthew Horne has chosen Wandsworth as a filming location.

As the Olympics draw ever closer, Battersea Park’s Millennium Arena continues to host a number of world class athletes for photoshoots and filming, such as Ben Challenger, Oscar Pistorius, Liz Yelling, Paula Radcliffe and Daley Thompson. 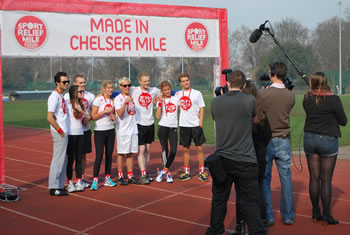 The cast of E4’s reality drama Made In Chelsea have also visited Battersea Park and the surrounding area to film scenes for the hit show. Several members of the cast were also filmed running their mile for Sport Relief at the Millennium Arena.

In the past year, Academy Award winner Meryl Streep and Friends star Matt LeBlanc, have paid the borough a visit, as have pop sensation One Direction.

For budding film-makers, the Film Office has an annual Shorts Film Fund which is available to anyone living, working or studying in the borough, to assist in the production or completion of short film projects – visit www.filmlondon.org.uk/boroughfilmfunds.

Long Distance Information, written and directed by Douglas Hart, was one of the short films funded by Wandsworth in 2010 and was met with wide acclaim at this year’s London Film Festival where it had three sell out screenings and was cited as one of the best live action shorts. The film has also been screened at the Sundance Film Festival, Clermont-Ferrand, Glasgow and Bristol Encounters 18th International Film Festival