Twenty year old drummer Nathaniel Fuller has come a long way since completing his Music Performance course at London’s South Thames College in 2010. London born Nathaniel is based in Battersea, when he’s not on tour but t the moment he is jet-setting around the UK, supporting chart-topping star Wretch 32. His CV also boasts playing on Jessie J’s first ever UK tour and supporting American star Alexis Jordan. Throughout his career Nathaniel has been fortunate enough to rub shoulders with the likes of Tinie Tempah, Example, Yasmin, Ms Dynamite and Ed Sheeran.

Nathaniel came to South Thames College on an entry level course with no formal qualifications. His tutor described school as a “write-off” for Nathaniel, but during this time he found his calling as a drummer. Music was a natural choice for the young star: “I was always musical and played the drums at the age of three. I used to pick up sticks and go around banging things in the kitchen. When I got a bit older I learnt how to play the drums properly and started to play for my Church each week.

“I then went on to become a freelance drummer and since completing my course at South Thames College I’ve gone on tour with many artists and last week played on the Later with Jools Holland show. I’ve been in a fortunate position where I haven’t really had to audition. I’ve mainly been headhunted and I tend to invite artists to gigs.

“The course at South Thames College was really good starting point and helped along the way and ensured I kept learning. It was also good for a performance angle because I was playing everyday and helped me to make contacts in the industry.”

South Thames College tutor Nick Osbourne said: “Nathaniel had a great attitude towards his work and a good feel towards music. He did very well on his course and progressed due to his great musical abilities. Although he found the academic side hard, he learnt numerous skills at college and maximised networking opportunities through the guest speaker programme and learnt how to become employable.

“In 2009 Nathaniel was part of a band called Livewire that came joint first in the Popular Music category for a national competition called World Skills UK. During his time at College I really saw Nathaniel grow and he learned to play for the song and not to overplay the drums. Most people see the vocals as king and queen of the industry and so Nathaniel learned to not overcompensate when he should be hitting into a groove and supporting. Nathaniel definitely had both the feel and the ability and knew how to do all the fancy tricks but do them at the right time.”

South Thames College offers various courses for all abilities in the creative industries including Music, Music Performance, Music Technology, Performing Arts and Theatre Production. Nathaniel Fuller started on a Level 1 Music course and progressed to a Level 3 Music Performance qualification which is the equivalent to three A Levels. He now supports chart-topping artists on tours throughout the country. The Creative Industries department is housed at the College’s Wandsworth Campus where students benefit from state-of-the-art performance and recording studios, a fantastic celebrity filled guest speaker programme, and passionate teaching staff well connected in the industry.

For more information about the Creative Industries department at South Thames College go to www.youtube.com/souththamescoll#p/a/f/1/x9WkRlZZBqg 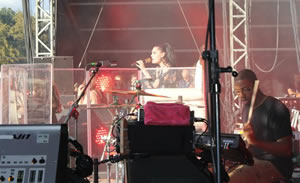 South Thames College has four centres across south west London in Wandsworth, Merton, Tooting and Roehampton. The College caters for over 23,000 students on full, part time and leisure courses. To watch a clip of Nathaniel playing for Jessie J go to http://youtu.be/8109mVA-qOc

A clip of Nathaniel on the Later with Jools Holland show can be found here http://youtu.be/V9Vyn7Yxguo