Harini Thiruchelvam spends much of her spare time volunteering 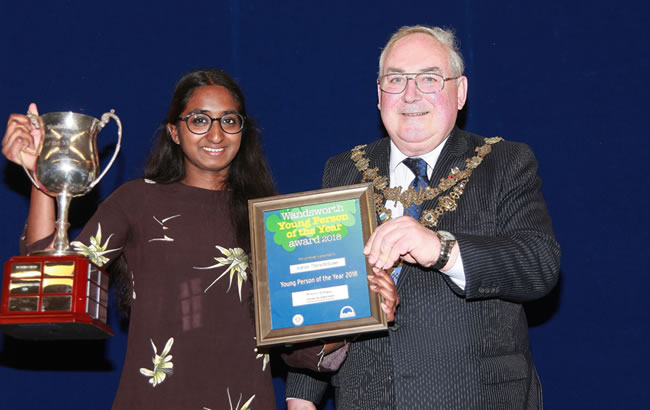 Harini Thiruchelvam, who spends much of her spare time volunteering, has won this year’s Wandsworth Young Person of the Year Award.

As well as being academically gifted, Harini is hoping to train as a vet and volunteers for three hours each week at an animal re-homing centre run by Cats Protection. She also helps out at a horse riding school for one day a week and has recently started work as a veterinary assistant once a week.

For the past five years she has volunteered at a library on a reading support programme and is a mentor to younger students at Graveney School. As well as the award, she has won £500.

Presenting her award, the Mayor of Wandsworth Cllr Leslie McDonnell, said, “Harini’s concern for the wellbeing and her consistent support for her school community are heart-warming. Her personal dedication, self-discipline and ability to make the very best use of her time are a lesson to all of us, young and old alike. Harini is the deserving recipient of the Wandsworth Young Person of the Year Award for 2018.”

Other young people were recognised for their achievements at the awards ceremony were:

12-year-old Rhea Kara who has raised £50,000 for the charity Reverse Rett by selling her own paintings.

Sofia Perera was recognised for her work with the Wandsworth Youth Council raising awareness of mental health issues.

Sinead Brown who attends Ark Putney Academy is the only school-age pupil to be admitted to the Office for Students panel, which represents students’ interests in higher education.

Two groups were recognised – the Band Project at Ark Putney and The Gap Youth Club, which provides a safe social space for LGBTQ youngsters

The event is organised by the Young Person of the Year Trustees in conjunction with Wandsworth Youth Service and is funded by the Rotary Club and Wandsworth Community Safety Trust.

Nominations for next year's award will open in the autumn and anyone interested should check the council website at that time for news.

Find out more about what's on offer to young people in the borough by visiting wandsworth.gov.uk/youth.