Wandsworth's Young Person Of The Year Is Revealed

Michael is in Year 12 at Ernest Bevin School in Tooting. He hopes to become an architect and is leading a team in a CREST award project run by Imperial College to design sustainable school buildings in the UK and Kenya.

He is also a mentor for Year 7 pupils, helps youngers pupils with their reading, is a member of the college council and is chairman of Interact, the young people’s branch of the Rotary Club, at Ernest Bevin. 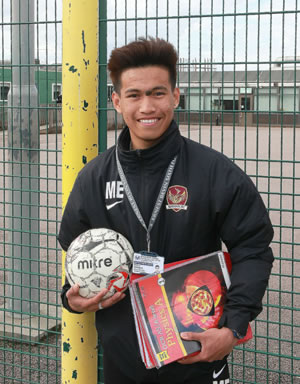 Michael (pictured above) raises money for the STEM4 charity which works with young people on mental health issues and is a keen sportsman, playing semi-professionally for Tooting and Mitcham FC.

Presenting his award, the Mayor of Wandsworth Cllr Piers McCausland said, “Michael is a real inspiration to others and a very deserving winner of the Wandsworth Young Person of the Year Award for 2019. All the winners here tonight have shown how lucky we are in Wandsworth to have young people who contribute so much to their school and their community.”

Tahsin Uddin: Tahsin recently helped an elderly person who fell in the street, calling an ambulance and staying with him until medics arrive. He also raises money for charity and supports the charity Helping Households Under Great Stress.

Conor Skehan: Conor faces daily challenges with his own complex health needs and is also a young carer. Nevertheless, he has excelled at his studies and is a role model for his peers at St John Bosco College.

Elis Russell: While battling his own health difficulties, Elis volunteers for the charity Versus Arthritis and campaigns for Evelina Children’s Hospital.

Shahab Valizadeh and Telisha Fowler: Shahab and Telisha are active members of Carney’s Community Youth Advisory Team. Their other volunteering work includes boxing sessions at an intergenerational day and the AIM HIGH event at Caius House. Shahab and Telisha also secured funding for a Fix a Bike and Keep It Workshop and last summer helped plan and run the first ever Summer Pick ‘n’ mix holiday activity scheme. 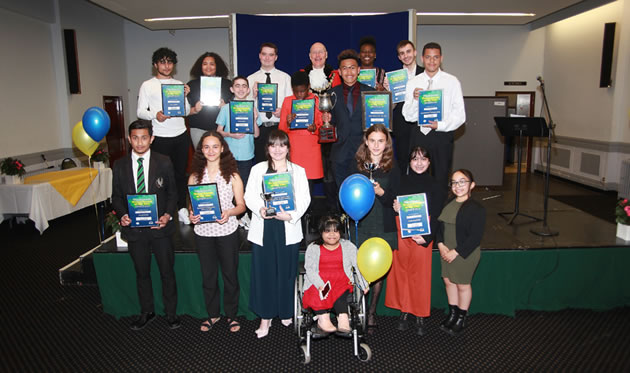 All the winners with the Mayor

Group Award: The Burntwood School Para Team has been so successful that four of their members, Sophie Valentine, Kinza Yasin, Aneesa Zahoor and Prado Fiestas, have been made Student Para Ambassadors and have gone on to mentor this year’s Year 7 SEND students.

Award for Outstanding Achievement: Conor Hughes is the chairman of the Wandsworth Youth Council and is heavily involved in its Mental Health Champion project. As a result, there are currently more than 100 mental health champions across seven secondary schools. He is also making an exceptional contribution as head boy at Southfields Academy.

Award for Overcoming Adversity/Difficulties: Despite difficult personal challenges, Debra Nelsom plays football at a competitive level and leads sessions for the charity Football Beyond Borders helping to empower young girls.

Award for Making a Special Contribution to Community Safety: Ryus Beckett has struggled with SEN issues and personal challenges but has gone from being on the brink of exclusion to becoming a model school citizen who calls out cyber bullying and looks out for others.

Rotary Award for Making a Major Contribution to the Community: Shannen Hassett combines caring responsibilities at home with being a willing helper at school. She also volunteers for the British Heart Foundation and the charity Share, is a girl guide and a member of a community choir and helps tidy up her local community hall.

The event is organised by the Young Person of the Year Trustees in conjunction with Wandsworth Youth Service and is funded by the Rotary Clubs of Wandsworth and the Wandsworth Community Safety Trust. The Young Person of the Year award is sponsored by the John Johnson Foundation, dedicated to one of the founder members of the award who dedicated his life to his community, both as a policeman and by helping to develop many charitable organisations.

Nominations for next year's award will open in the autumn.

Find out more about what's on offer to young people in the borough by visiting thriveonline.