The council has granted planning permission for the reconstruction and refurbishment of the Grand Hall at Battersea Arts Centre following last year’s fire.

The fire largely destroyed upper parts of the listed Grand Hall, with considerable damage to the rest of it.

Proposals for the rebuild were drawn up with input from groups including the Heritage Lottery Fund, Battersea Arts Centre's Board, Wandsworth Conservation Team and Historic England as well as local residents, artists and supporters.

The rebuild has been designed by Stirling Prize winning architects, Haworth Tompkins. The exterior of the building will be restored to match the original with improvements inside such as better acoustics and lighting. The unique theatre organ which was largely offsite and undergoing restoration at the time of the fire, will be relocated to the balcony, freeing up space beneath the surviving proscenium arch.

Operationally, the Grand Hall will be significantly improved, allowing for a wider range of events to take place uch as weddings, conferences, gigs and shows.

The Lower Hall, which had been refurbished before the fire, will be returned to its pre-fire condition and become a Creative Hub to help nurture fledging local creative businesses. 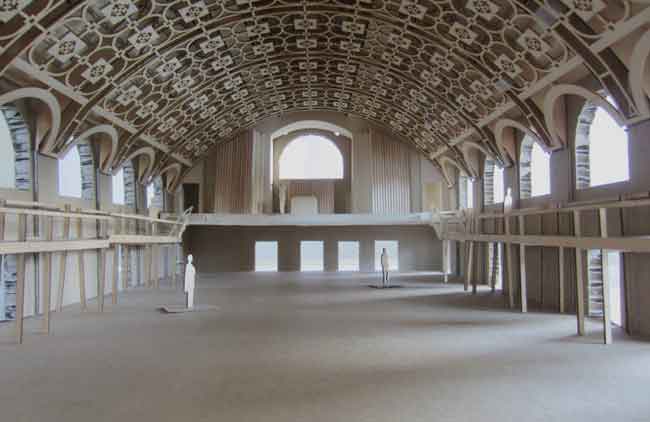 A model of the proposed rebuild

The renovation will build on work already underway at the Battersea Arts Centre to improve the 19th century town hall building. This includes a new open-air courtyard theatre and activity space opening this July, and eight neMay 18, 2016work in the building.

David Jubb, Artistic Director of Battersea Arts Centre, said, “People’s response to the fire was very moving; everyone involved with Battersea Arts Centre was touched by the breadth and depth of people’s kindness. As we rebuild the Grand Hall we will use up to 10,000 of the bricks from the original building. The salvage operation and the redesign work has been a huge labour of love.”

Wandsworth Council owns the building, which it leases to the Battersea Arts Centre under a 20-year rent-free agreement.

Find out more about BAC at bac.org.uk or follow @battersea_arts.