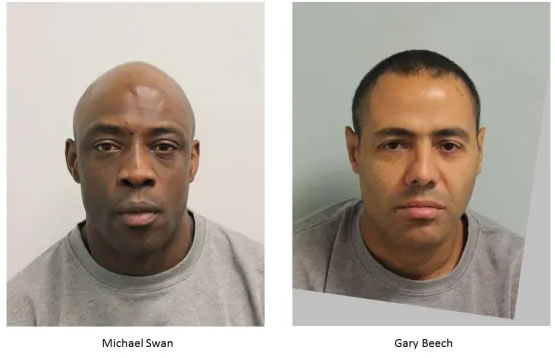 The two men who killed 46-year-old father of two Ian Tomlin after he confronted them over drug dealing near his home in Charlotte Despard Avenue have both been sentenced to life in prison.

During trial the court heard how Beech and Tomlin were neighbours, and that Swan, a close friend of Beech, was a regular visitor to the block.

Ian Tomlin believed the pair were dealing drugs from there and often challenged their presence on the estate.

This had led to a long-running feud between the victim and the two defendants, spanning many months before the attack.

On Wednesday 17 October ast year Mr Tomlin returned home shortly after 5.20pm to find Beech and Swan meeting in a communal area on the first floor landing of the building.

The court heard from a witness who described how Ian had armed himself with a baseball bat and chain during the confrontation. CCTV footage captured Swan and Ian fighting, with Beech intervening.

Ian was then overcome and struck on the head a number of times with the baseball bat he brought to the scene. He was also stabbed repeatedly in the neck.

Beech and Swan then left the block with Swan carrying what appeared, from CCTV footage, to be the baseball bat.

Police arrived on scene shortly after the assault, and found Ian lying on the floor of the first floor communal lift area with severe injuries.

He had received fatal wounds to the back of his head and neck and, despite the efforts of emergency services, was pronounced dead at the scene.

A post-mortem examination was held and identified Ian's cause of death as a blunt force trauma to the head and stab wounds to the neck.

Analysis of CCTV footage identified Beech and Swan as the men who had brutally assaulted Ian and left him for dead. Detective Inspector Jo Sidaway, from the Homicide and Major Crime Command, said, “These men acted together in a brutal assault leading to Ian’s tragic death.

“They overpowered Ian and began an excessively violent attack upon him, no doubt because he was again confronting them about their criminal activities.

“I hope this conviction brings some measure of comfort to Ian’s family.

“The verdict shows that we will not tolerate violence on London’s streets and officers will pursue and bring anyone who incites such brutal and horrific acts to justice.”