A bus driver who lives in Aslett Street, SW18 has been fined after being caught using his relative's disabled parking permit to park near his place of work.

Khublall Lochan, who works out of the Putney Bus Depot, was spotted on more than one occasion using the blue badge to park in Burstock Road, SW15 – just a short walk from the garage. He was ordered to pay a fine of £495, court costs of £542 and a £20 victim surcharge. 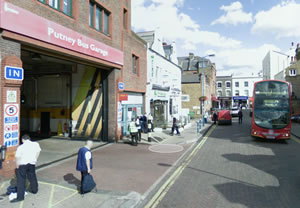 Lochan was one of four motorists taken to court this week as part of ongoing efforts to prevent the fraudulent use of disabled parking permits.

Nima Khalilifar of Hospital Bridge Road, Twickenham, was caught using his mother’s badge to park in Schubert Road, Putney whilst visiting his brother-in-law’s pizza business on Upper Richmond Road. He was fined £200 with costs £200 and a victim surcharge of £20.

Since the council’s permit fraud team began to actively investigate misuse of the blue badge parking scheme, nearly 500 dishonest drivers have been prosecuted and brought before the courts.

Among these have been lawyers, builders, estate agents, civil servants, hospital staff, a bank manger, a dentist and even the owner of a care home for the elderly. The offences have included theft, forgery, fraud and handling stolen goods. As a result of the council’s legal action more than £600,000 has been being returned to the public purse in fines and court costs.

The Council say that abuse of the blue badge system is rife across London and in other big cities because the holders are able to park virtually anywhere they like. But the badges can only be lawfully used when the disabled person is either driving the vehicle or being ferried as a passenger.

None of the four people prosecuted this week were ever accompanied by a disabled person, even though they were all spotted using badges on repeated occasions.

John Whitlow was caught driving from his home in Surrey and using his mother’s badge to park outside her house in St Ann’s Hill, Wandsworth, before cycling to work at a leading London university. He was fined £350 plus a £15 victim surcharge and ordered to pay prosecution costs of £400.

Commuter Anies Khan was driving from his home in Russell Road in Mitcham and using a relative’s badge to park close to Tooting Broadway tube station for the entire day. He was fined £1,000 with costs of £542 and told to pay a £20 victim surcharge.

The council’s transport spokesman Cllr Russell King said: “These drivers seem to have absolutely no qualms whatsoever about a leaving a disabled relative cooped up indoors all day just so that they can bag a free parking space."