Have your say on the introduction of less busy backstreet routes 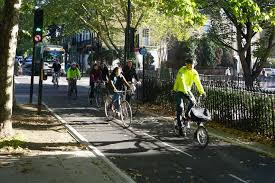 The public consultation on revised proposals for two new Quietway cycle routes through Wandsworth has reached the halfway stage.

Residents who want to take part in the consultation still have time left to do so but with the busy festive season fast approaching they are being urged not to leave it too late before submitting their views. The deadline is December 18th.

Quietways are being installed across the capital by Transport for London (TfL) which wants to create a network of quieter and less busy backstreet routes that inexperienced and less confident cyclists would be happier using.

There are two proposed routes that pass through Wandsworth - from Clapham Common to Wimbledon (Quietway 4) and from Waterloo to Norbury (Quietway 5).

This route has been amended following the earlier consultation and no longer includes a proposal to introduce a signalised crossing in Garratt Lane at the junction with Trewint Street and Waynflete Street. Instead it would divert along Summerley Street and pass through the junction of Garratt Lane with Magdalen Road. Views are now sought on this proposed new section of route.

Following the earlier consultation TfL has agreed that the tarmac/asphalt surface of the existing cycle route on Tooting Bec Common could be replaced with Breedon gravel, which is considered a more suitable surface for the common that should also act to modify cyclists’ behaviour and so reduce the likelihood of conflict between cyclists and other common users.

Views are also being sought on further modifications to the route across the common which are now proposed following the previous consultation.

These include re-routing the Quietway on to the diagonal path that runs from Bedford Hill to the lido car park. This would require the consent of the secretary of state, but if approved TfL has said this surface could also be replaced with Breedon gravel.

This route would mean that the existing horse ride, which is popular with runners and joggers would be left unchanged and that the area outside the playground on Chestnut Avenue would also no longer form part of this Quietway.

Wandsworth’s transport spokesman Cllr Jonathan Cook said: “We’ve had some vey interesting feedback so far but we want to make sure we hear from everyone with a view on this.

“The consultation continues until December 18th so there is still plenty of time for people to have their say, but in the busy run-up to Christmas it might be best not to leave it right to the last minute.

“We certainly want to play our part in encouraging more people to take up cycling but it is also important to make sure these proposed routes do not have an adverse impact on other road users, pedestrians and visitors to our commons and open spaces.”

To find out more about the proposals, view maps of the proposed routes and register your views as part of the consultation visit www.wandsworth.gov.uk/quietways.