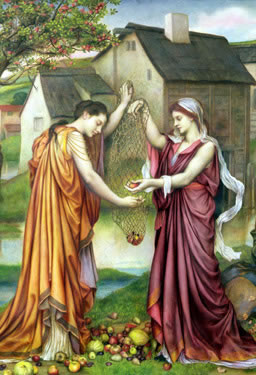 The De Morgan Centre for the study of 19th century art and society used to be based on West Hill but closed in June 2014 along with the Wandsworth Museum which also shared its space.

After five years of endeavour De Morgan curator Sarah Hardy has ensured that the collection of De Morgan artwork can still be seen around the UK. Locally, highlights from the De Morgan Collection are currently on display at the Watts Gallery in Surrey.

The De Morgans were close friends and associates of George and Mary Watts and often visited Limnerslease, the Watts' home. William De Morgan advised Mary on the construction of the Compton Pottery kiln which she built in the grounds of Limnerslease and he also collaborated with George on his memorial to everyday heroes in Postman’s Park, in the city of London.

Watts famously declared of Evelyn De Morgan that "I look upon her as the first woman artist of the day — if not of all time". Many parallels can be drawn between the two artists’ work, where their shared interests in subjects such as mythology, spiritualism, psychical research and social improvement collide.

Works On Display
A selection of work highlighting different aspects of Evelyn's oeuvre is on display in Surrey. Created shortly after Evelyn left the Slade School of art, Ariadne in Naxos is painted in a neo classical style, whereas the dramatically dynamic The Storm Spirits is executed in a style much more reminiscent of Edward Burne-Jones and the Pre-Raphaelite movement. Evelyn's sensitive portrayal of The Angel of Death I is an example of the theme which would dominate her career in her later years - that of death and the preparation of the soul's ascent to heaven.

The work of Evelyn's husband William is also featured in the exhibition and of particular note are the fabulous golden peacock plate and a large bottle vase, decorated in the Persian style with foliage in vivid blue and green tones, for which he is best known. Of particular note is the shop sign William made to go above the door of his shop in Great Marlborough Street, Soho.

The De Morgan Foundation has worked with local 16-18 year olds to create an audio guide to the exhibition at the Watts Gallery. Please follow the link below to enjoy!

The De Morgan Collection at Watts