Which could result in a large fine or even prison 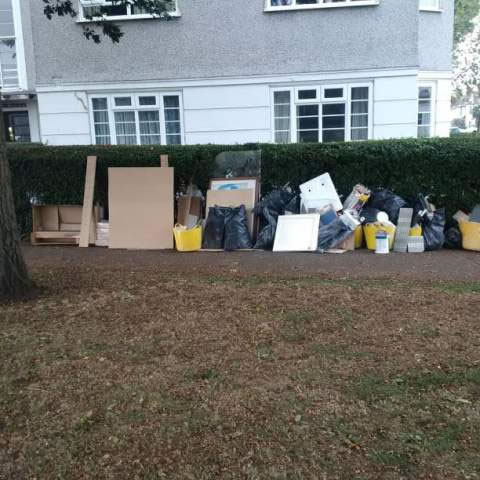 A builder who dumped a huge pile of rubble, timber and other unwanted construction materials in a small local park is being investigated by the council and faces the prospect of a big fine and potentially even a jail term.

The flytip was discovered on Garratt Green in Earlsfield last Friday and is now the subject of an investigation by officers in the Wandsworth parks police.

Their enquiries have led to a local builder who now faces the likelihood of receiving a summons ordering him to appear in front of magistrates.

The pile of waste was removed by the builder later on Friday afternoon after he had been tracked down and spoken to by the officers.

Anyone convicted in a magistrates court of breaching environmental protection laws could face an unlimited fine and/or a jail term of up to five years.

Wandsworth’s environment spokesman Cllr Jonathan Cook said, “This was a very serious flytip in a much valued and precious local green space. People who commit such crimes should be under no illusion about the penalties they face if caught and convicted.

“In these types of cases we would always urge the courts to impose tough sentences to reflect the community’s anger and dismay at this callous and unacceptable criminal behaviour.”

Residents having work done on their properties should always check with their builders and other contractors precisely how they will be disposing of any waste materials.

They should also be extremely wary of people knocking on their doors unannounced and offering to take away their rubbish.

Cowboy waste contractors often drive around residential areas looking for homes that are being refurbished or cleared. They will approach the owner and offer to take “junk” away for a cut price rate.

But instead of taking it to a proper waste disposal site and paying the appropriate fees, they simply dump it somewhere nearby – often in parks or other open spaces – leaving taxpayers to foot the clean-up bill.

In these cases it is not just the flytipper who is committing a crime – the householder who paid them to take their waste away is also liable under the law.

Residents wanting rubbish cleared can call the town hall on (020) 8871 8558. The council will remove waste for a small fee. If households choose a licensed private contractor instead they must make sure they get a proper receipt.

Anyone with information about rubbish being dumped should telephone (020) 8871 6396. All calls will be treated in confidence.