Art, Science And Education Come Together At The Pump House

With works from top artists, scientists and local school kids

The Pump House Gallery’s new exhibition brings together art, science and education, with works by three top artists working in collaboration with scientists and local schoolchildren.

The exhibition looks at how the world is perceived through the lenses of science and art and then fusing the two together to reveal new ways to teach science.

The Pump House has commissioned three new works by artists Semiconductor, Lyndall Phelps and Alistair McClymont. Each artist has been working in close collaboration with a scientist and six primary schools from Wandsworth.

Artistic duo Semiconductor have been exploring the concept of light alongside scientist Ben Robinson and teachers from West Hill and from St Anne’s primary schools. This resulted in their work Band 9 -  an installation of light boxes presenting scientific data from Cirrus clouds.

Artist Lyndall Phelps has worked with scientist Max Boleininger and teachers from All Saints CE and Hotham primary schools to research the possibilities of forces and magnets. Phelps has developed a series of installations that invite visitors to explore and interact with the imperceptible effects magnets have on their surroundings. 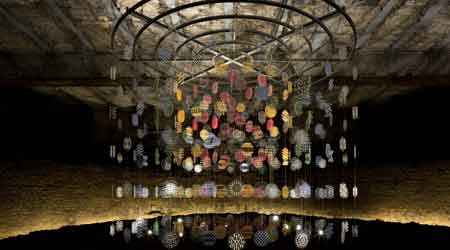 Artist Alistair McClymont collaborated with scientist Alexandra Berditchevskais and teachers from Griffin and Falconbrook Primary School to investigate the scientific possibilities of sound. He created the work One should never mistake pattern ... for meaning (Function Generator) after becoming interested in how very low frequency sound, despite being inaudible, affects the body and the environment.

As an outcome of the collaborations formed between artists, teachers and scientists, an accompanying free Resource Pack for schools has been produced to explore the Key Stage 2 curriculum areas of Sound, Light and Forces & Magnets. Throughout its duration, the exhibition is open for school visits that include free hands-on workshops and exhibition tours.

The Pump House Gallery is owned and operated by Wandsworth Council and is situated in the middle of Battersea Park.

It is open from 11am to 5pm on Wednesday to Sunday while the exhibitions are running. Entry is free.