Proposals have been unveiled for a new £710,000 pavilion at the Tooting Bec Lido which would provide space for workout and exercise classes plus new toilets and a first aid room.

The plans have been drawn up jointly by the council and the South London Swimming Club (SLSC), in consultation with Sport England and could see the attractive new pavilion open in August 2015.

As well as toilets and a first aid room, the pavilion would house a multi-purpose exercise room that would be used by the SLSC to enhance and increase participation in their annual programme of swimming and triathlon competitions, and could also be hired for other recreational activities. A new courtyard would also provide additional space for sunbathers.

The pavilion would be built at the deep end of the Lido - Europe's second biggest outdoor freshwater swimming pool - and would be contained entirely within the lido's existing boundaries. It would not encroach onto Tooting Bec Common.

The council has agreed to pledge £150,000 towards the scheme with a further £311,500 being provided by the SLSC.  A bid for the remaining £248,500 has been submitted to Sport England and a decision on this funding is expected early in the new year.

The lido is one of London's best loved open air pools. Earlier this year it was described as a "south London treasure" by the Daily Telegraph which conducted a survey of pools in the capital.

The paper listed the lido as number two in its list of the capital's top ten swimming destinations, adding: "The lido's colourful changing cubicle doors lend character and distinction. There's a café too if you don't want to spend all your time in the water."

The lido is a colossal 91.5 metres long with a separate pool for toddlers and extensive space for sunbathing and picnics. 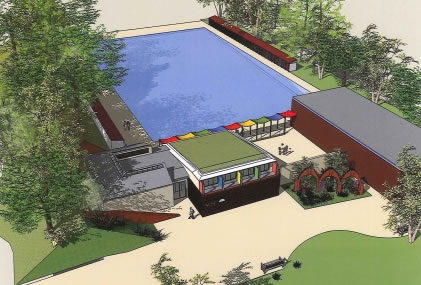 Over the past decade £1.5m has been spent by the council in improving the facilities and ensuring the pool's long term future.

In recent years it has been named by Time Out magazine as the best in place in the capital for 'uninterrupted swimming' and as the 'Best Outdoor Swim in London' in The London Pools Campaign's Golden Goggles Award.

The lido is open to the public from the spring bank holiday weekend until the end of September. Opening hours are 6am to 8pm until August 31 and 6am to 5pm from that date until September 30. The pool remains open to members of the SLSC the whole year round.