Residents have voted for their favourite design

More than 600 people have voted for the mural of their choice to be produced on the site of Church Lane car park in Tooting, which has become a fly-tipping hot spot.

The end result was very close, but the winning mural design (pictured below) received 54 per cent of the vote, and will be produced by street artist Will Vibes from Anysurface. 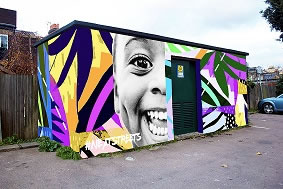 The theory is that when somewhere looks nice, people are less likely to dump their rubbish. Therefore, as well as the mural, the car park will undergo a general tidy up in an attempt to deter people from illegally dumping rubbish.

The work is part of Wandsworth Council’s #NeatStreets Tooting initiative that launched on 22 February in partnership with award winning environmental charity Hubbub. Over the coming months, Wandsworth Council will be trialling some ideas in Tooting to help combat littering across the borough. Residents will have the opportunity to get involved in a number of activities including a community clean-up day, sprucing up Church Lane car park, and gum chalking events. Find out more here.