Consultation On Pedestrian Safety In Tooting Is Launched

Find out more about ambitious plans for the town centre 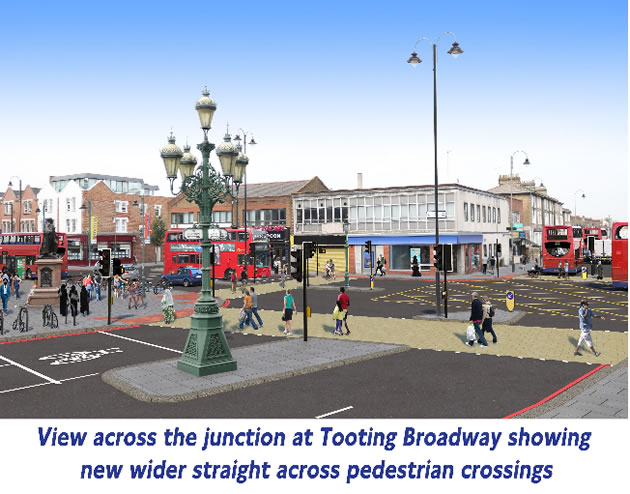 Residents and businesses in Tooting can find out more about ambitious plans to improve pedestrian safety in the town centre at a series of face-to-face briefings.

The plans have been drawn up by Transport for London in conjunction with the council’s highways engineers, and are designed to encourage more journeys on foot by improving conditions for pedestrians and making the town centre a safer place for those who walk

The proposals are now subject to public consultation and to help answer questions from local people, staff from TfL will be attending special information sessions over the coming days.

The drop-in sessions are being held at:

The plans call for a wide-ranging set of urban realm improvements, including:

Pavement treatments would be installed at side road junctions to form ‘continuous footways’ giving the impression of a continuous pavement across the junction. This treatment has been installed at other locations along the Transport for London road network, including at the junction of Upper Tooting Road and Stapleton Road.

This measure would seek to prioritise pedestrian movements by encouraging vehicles to slow down and give way to pedestrians. For vehicles exiting the side road, TfL is looking to introduce give-way markings, in addition to the continuous footway, to encourage car drivers to stop and enable pedestrians to cross safely.

As well as these measures TfL is also proposing to reduce the speed limit to 20mph on its main trunk roads – to complement the 20mph limit that was introduced by the council in all the borough’s residential side streets last year.

In addition TfL wants to protect bus journey times, where possible, by extending bus lane facilities along the A24.

The plans also call for existing pedestrian crossing in Tooting High Street to be widened and raised and for the introduction of “straight across crossings” rather than the current staggered ones outside Tooting Broadway Station, while a new signalised crossing would be installed at the junction of Longmead Road and Mitcham Lane. This would bring together two crossings that already exist and provide a junction where the green-man phase is present across all arms at the same time. TfL also plans to introduce a new crossing in Tooting High Street near Selkirk Road.

At Totterdown Street, the plans could see a community-oriented space. This would not mean wholly traffic-free but could result in changes to parking, road surfacing and planting to make it a more inviting space. TfL is keen to hear local people’s views on this question before carrying out further design work.

The consultation closes on Monday, December 10.