The roadworks began on Saturday and has caused major disruption and delays this week, with traffic queues stretching back to West Hill and Putney High Street. The works are expected to last 17 days in total. 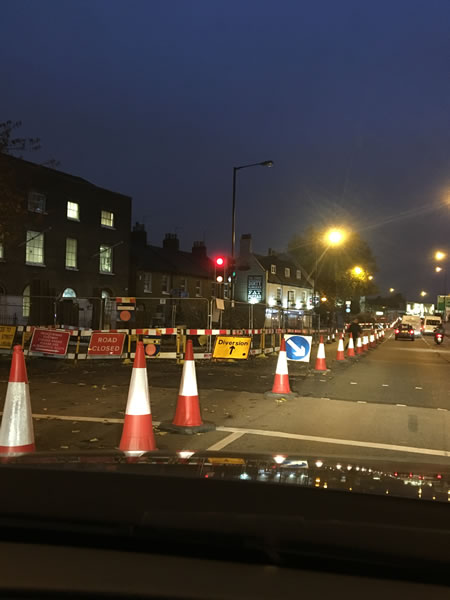 Lanes cordoned off in Armoury Way

Despite the inevitable major impact on the local transport system, the lane closures were only announced late on Friday afternoon which severely hampered efforts to inform and alert motorists and bus passengers.

SGN explained that the road disruption is unavoidable, "We need to divert our existing gas mains to make way for the new Thames Tideway Tunnel." However the lack of reasonable warning was highlighted by Wandsworth Council’s deputy leader Jonathan Cook, whose council remit covers transport issues, “It really isn’t good enough. This has caused traffic chaos today and because there was virtually no prior warning most commuters had no idea it was happening until they got caught up in the middle of it."

The Council alerted residents and businesses by posting a press notice and using social media to forewarn local people, and is now calling on TfL and the utility companies to go the extra mile in future when it comes to informing residents, businesses and the travelling public about their major roadwork schemes.

“Anyone with just a smidgeon of local knowledge could tell you that shutting off two lanes at one of the busiest sections of the one way system would cause mayhem, yet between them TfL and SGN did precisely that without really telling anyone," continued Cllr Cook.

“No doubt they will both blame each other but it really is incumbent on both of them to make sure they don’t leave hugely disruptive projects like this until the last minute before announcing them.”

“Wandsworth residents deserve better than unexpected and unwanted surprises like this.”

SGN said, "We are investing £1 million to upgrade our gas network in Armoury Way. We need to divert our existing gas main to make way for the new Thames Tideway Tunnel. This will see us replace our old main with modern plastic pipe away from its current location.

"We understand that people can get frustrated by roadworks. However, the new plastic pipe has a minimum lifespan of 80 years. This means that when the work is complete, Wandsworth homes and businesses will continue to enjoy the benefits of a safe and reliable gas supply for years to come."