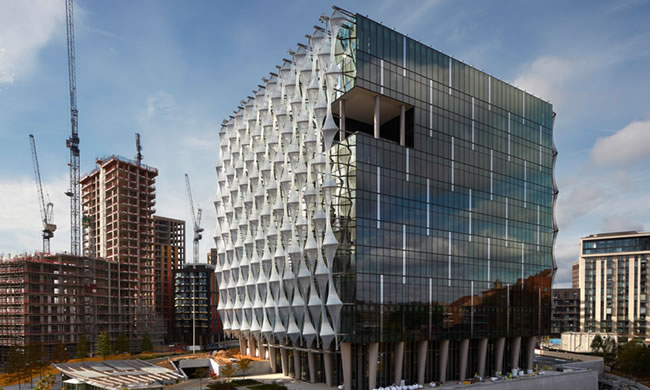 The U.S. Embassy in London will be moving to its new location in Nine Elms in the new year and will open to the public on January 16th.

The new building at 33 Nine Elms Lane has taken a decade to complete from the 2008 announcement of the purchase of its Nine Elms site. The new building, complete with a moat, has been designed to provide a modern, welcoming, safe and energy efficient embassy for the 21st century.

The then U.S. Ambassador to Britain, Louis Susman said at the time that the embassy must move from its current central London location because the 1950s building is too small, outdated and hard to defend from security threat.

When announcing the winning design by Philadelphia-based architects KieranTimberlake, Ambassador Susman said, “We hope to contribute to the architectural heritage and future history of this great city. We will be, now and in the future, a vital contributor and a good citizen in the community of our new home.”

The design was opened up to competition "to ensure the new facility reflects the best of modern design, incorporates the latest in energy-efficient building techniques, and celebrates the values of freedom and democracy". The £800 million project has been funded entirely by the proceeds of the sale of other U.S. Government properties in London, not through appropriated funds.

At the groundbreaking in 2013, U.S. Ambassador (2013-17) Matthew Barzun said, “We are proud to be putting down roots in Nine Elms.  And we’re proud to provide an anchor for more businesses and jobs, bringing thousands of new neighbours to fuel economic revitalization here.” 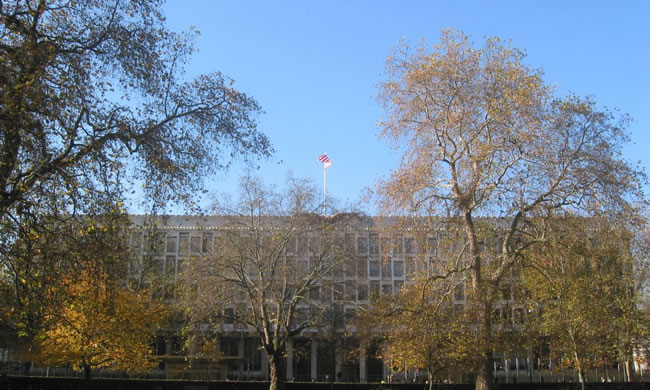 The Embassy, occupying the whole west side of the square, was designed by American/Finnish architect Eero Saarinen, who is also famous for designing the iconic 'Tulip' table and chair. The design brief was for a building which would house all the major sections of the Embassy under one roof in a style which would blend with the existing architecture of Grosvenor Square.

During the Second World War, when the Chancery was on one side and General Eisenhower’s headquarters on another, Grosvenor Square was known as “Little America".