Residents Back Major Redevelopment Of Estates

Residents of the York Road and Winstanley estates have given their backing to a major redevelopment project which would see hundreds of their homes rebuilt alongside a new park, leisure centre, library and community centre.

Leader of Wandsworth Council Ravi Govindia said the results of the latest consultation have given the scheme a clear direction and a solid footing.

The town hall plan to see up to £100m invested across these two neighbouring estates and the Alton West estate in Roehampton.

The York Road and Winstanley estates were built in the 1960s and '70s and are located next door to Clapham Junction Station.

Cllr Govindia said: “We offered estate residents four investment options ranging from refurbishment and environmental works to a comprehensive rebuilding project. Seventy per cent of responses came back in favour of the more radical approach.

“Based on the community’s response we have drawn up a ‘preferred option’ for the estates which would see a large section of the neighbourhood completely transformed. Many of the existing 1960s and '70s housing blocks and shops would be replaced with modern buildings built around a traditional street pattern.

“Some other blocks would be refurbished and throughout both estates we are proposing new investment in street lighting, landscaping and other environmental improvements which will give the entire neighbourhood a visible lift. 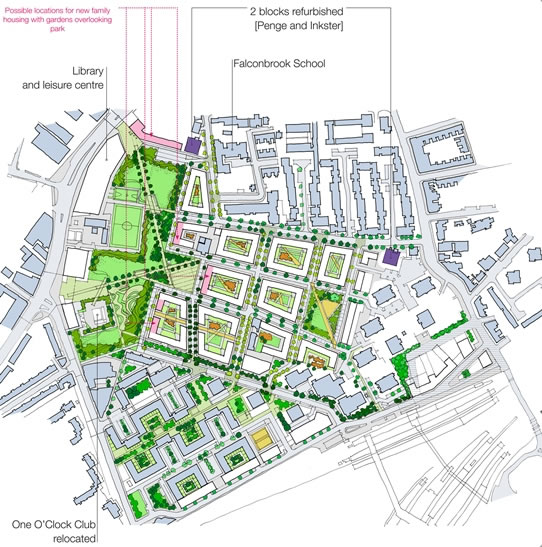 “We are also proposing a brand new library, leisure centre and community centre which would be terrific assets and would draw more people into this part of Battersea. The existing park would be greatly improved including new sports pitches and better children’s play facilities.

“The scheme would also create a new public square outside the entrance to Clapham Junction Station on Grant Road. This would be lined with new shops, cafés and businesses to provide a much more welcoming and attractive gateway to one of the country’s best connected transport hubs.

“A network of new and improved pedestrian and cycle paths would be created to better integrated the estates with the surrounding area. This would include new and attractive routes through the estates which link the Battersea riverside with Clapham Junction Station and Clapham Junction town centre.

“The redevelopment is part of a much wider package of support the council is focusing on the Winstanley and York Road communities. Alongside the physical changes we have launched an employment support service to help our residents take advantage of an improving jobs market and a mentoring programme is now up and running to help young adults achieve their full potential.”

The council has made a commitment that every council tenant and resident leaseholder who needs to move out of the old buildings would be offered a new home on the estate or close by.

If councillors back the scheme detailed discussions will continue over the coming months with residents associations, residents groups and other key stakeholders on specific aspects of the project.

Another major public consultation would then follow later this year to give residents another opportunity to refine the scheme and shape the neighbourhood’s future.

Find out more and sign up for e-newsletters about the project at www.wandsworth.gov.uk/winstanleyyorkroad